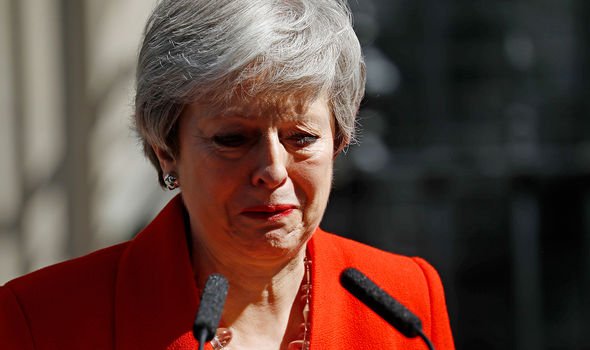 Walking down a supermarket aisle recently, I found myself face to face with a ‘bank’ of daily newspapers. Every single one displayed an image of Teresa May’s face, contorted with emotion as she fought back tears while giving her resignation speech. If anyone wanted to be reassured that patriarchy is alive and well, they need have looked no further.

Although I am used to speaking in front of an audience, I often find myself surprised by tears welling up and desperately trying to keep my voice on an even keel when I am talking about something that matters alot to me. I often wish I could find a way of not being overcome by emotion when in public but I can’t. Most women experience this at some time or other and struggle to maintain a professional composure . Men too find themselves ambushed by tears at a wedding or funeral when they are talking about someone they love.

The response is generally one of sympathy, an understanding that the person is vulnerable at that moment. So what explains the viciousness that greeted Teresa May’s tears? When our previous female Prime Minister left Downing Street after being ousted by a Cabinet coup, she was caught in tears as she was driven from Downing Street. That image was shown constantly and still is.

With both May and Thatcher, it represents a different kind of coup for the press. It’s a cruel gesture of revenge: we got her! She who dared to stand up to her male colleagues, to ignore their authority, to defy their power…finally we get to show her as she really is, a silly weak woman who cannot control her emotions. What a triumph!

I did not agree with Teresa May’ policies any more than I did Margaret Thatcher’s but that’s not the point. Teresa May was, probably uniquely among her Conservative colleagues, motivated not by ego and personal ambition but by a genuine commitment to the people of this country.

Her mistake? Being born a woman and working in an overwhelmingly male institution. It’s the price women pay all over the world.

5 thoughts on “The Price Women Pay”